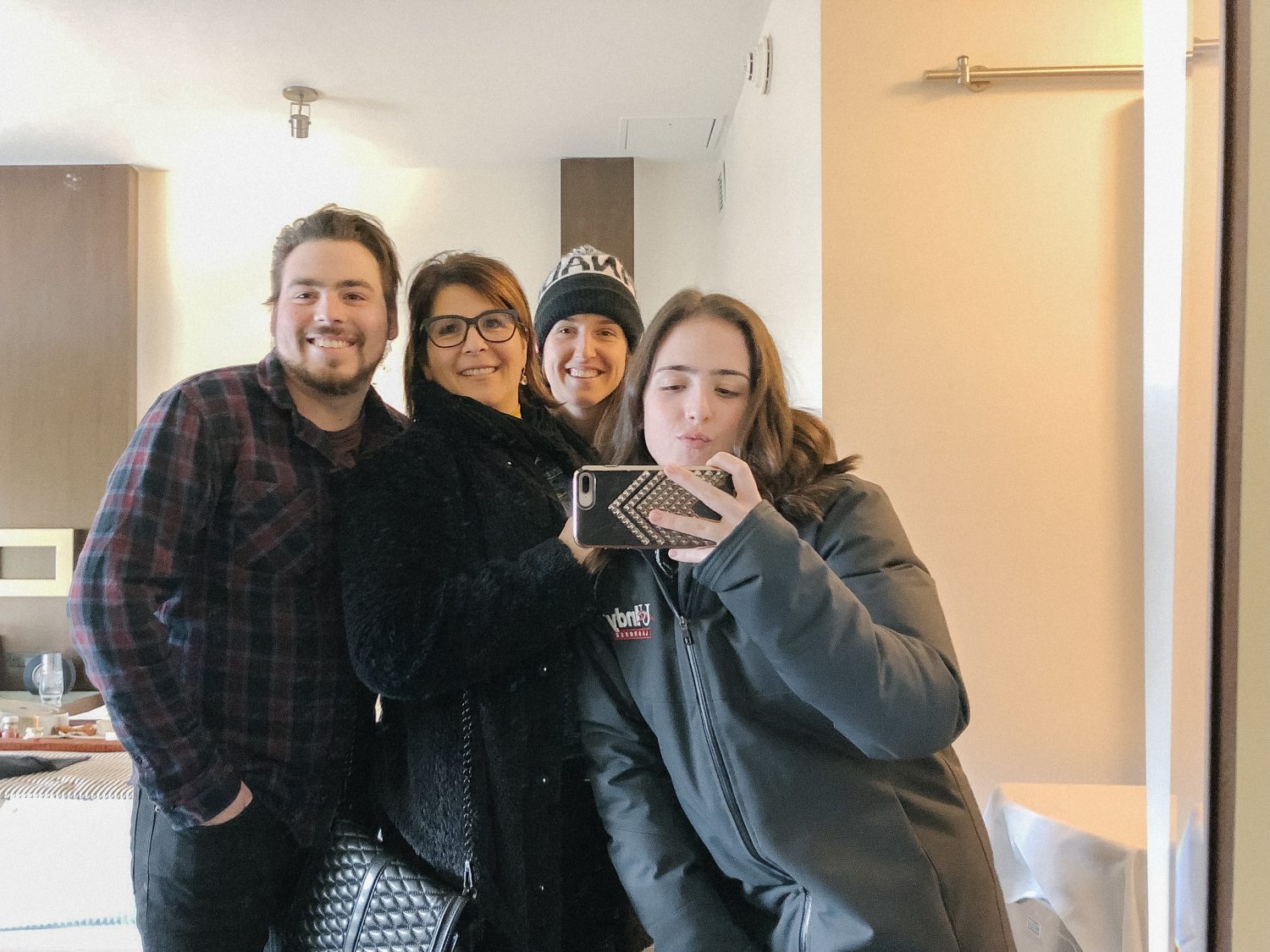 You ask, how did I plan a surprise birthday party for my daughter who lives 3,799.6 km away?

Despite all the fibbing, my Indianapolis University attending daughter Delaney was on us the whole time.  We tried brushing her off, but she is a zealous girl who doesn’t back down. When she kept at it, it took everything in me not to shout that we were coming so please, please be quiet.

Delaney’s particularly clever plan of attack was to say to Russ and I, “Just send Ryland for my birthday.” Her brother Ryland, knowing the surprise birthday party plan already, kept that going by continually saying, “Yeah, come on, Mom and Dad, send me!”  That was annoying too! Kids!

At the beginning of December 2018, Russ and I called Ryland and his girlfriend Ali with this idea:  “Hey, we were thinking of traveling to Indianapolis for a surprise birthday party for Delaney. Want to come?” They were in.

The plan of attack changed about 75 times prior to the actual day. Surprise birthday party ideas flowed. Some we nixed, others we kept.

At 6 am the morning of our flight Russ woke up not feeling well.  He felt like he had vertigo. He had had a form of vertigo last year so we followed the plan of action we’d created then. I arranged for him to have a last minute physio appointment. They assessed him and he didn’t have vertigo.  He did however have the flu. It knocked him down hard and unfortunately he couldn’t travel. Insert sad face.

I am thankful for having a person on the ground in Indianapolis who helped me navigate Delaney’s schedule for Saturday morning.  Delaney’s roommate and teammate, Hannah Burczyk, and also teammate Peyton Romig, thank you!

One of our surprise birthday party ideas was to reveal ourselves to Delaney in stages.  So Stage 1 was right after her team’s strength training session at 10:40 am. Ryland waited for her outside the weight room.  Cameras were filming and she saw him within 2.5 seconds of coming through the doorway. She jumped on him and gave him a big hug!

Stage two was Ali.  She was sitting on a bench outside of the dressing room facing the opposite way. Delaney said she recognized her right away as she came around the corner because she recognised her toque.

Stage 3 was me. I had just made it into Delaney’s apartment and was hiding in her bathroom whispering to Russ on Facetime when I got a text that read “in building’’.  From me dropping Ryland and Ali off I had had approximately 20 minutes before they’d arrive.

You wouldn’t think I would be cutting it that close, considering I only had ½ km to drive – but Karen had a Karen moment.  You see, I got in the elevator at Greyhound Village with some other people and when they got off on the 3rd floor so did I. I went down the hallway, walked into Delaney’s apartment (which was dark), and then walked over to her bedroom door and found it locked.  This was weird because I know she doesn’t lock her door.

I stood there perplexed for a moment. Then I heard movement inside.  A girl in her pjs with long red hair answered this door. I said, “ Hi! I am looking for Delaney. I am her Mom. I am not a weirdo.”

The girl had few words to say but I managed to figure out real fast that I was in the wrong apartment. I said, “I am going to go now,” as I dropped some candies I was going to give to Delaney.  Nope, I did not pick them up. I kept moving.

Back down the hallway and up to the 4th floor I went, laughing all the way.  I started to think of the scenarios I could have walked in on and laughed even harder.

Anyway…safely tucked away in Delaney’s bathroom, I heard my family enter the apartment. Before I could walk out and tell Delaney she was out of toilet paper (my surprise moment) she was smack dab in my face, hugging me!

She loved all the surprises and we had a team Margaritas at a local spot, including chips and guacamole of course.

I spent the afternoon and early evening with 20 somethings.  It was great. I wished them a safe evening of fun and drove myself back to The Alexander Hotel. Gotta love a surprise birthday party, especially when it involves traveling to Indianapolis.

Happy 21st Birthday to my girl! <3. This was one for the memory books for sure!